RACING IS IN OUR BLOOD. IS IT IN YOURS? 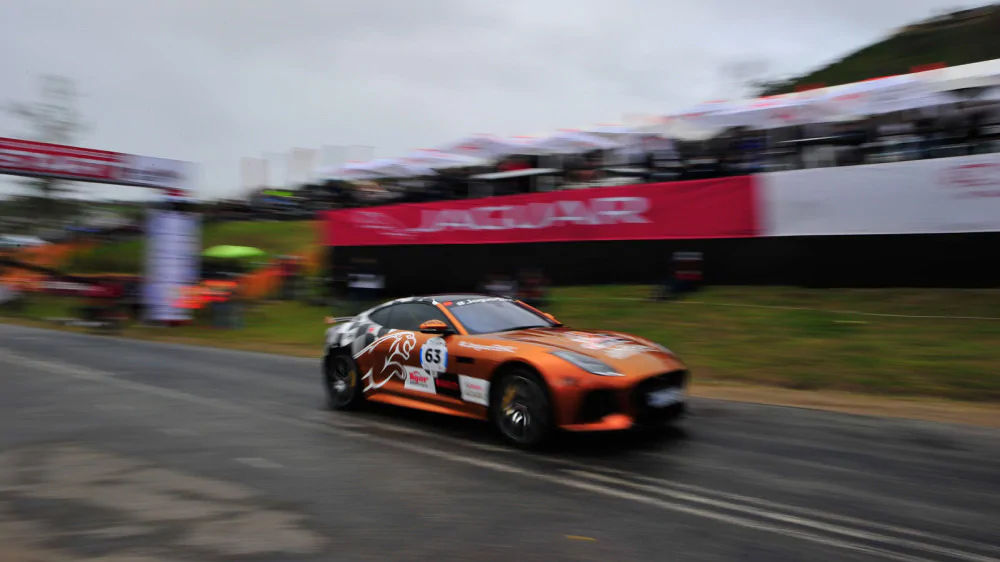 The tenth anniversary edition of the Jaguar Simola Hillclimb was a successful affair for Team Jaguar, with a total of eight podium finishes to show for all eight entries across various categories.
All eyes were on Mark and Gavin Cronje who contested an epic brother-versus-brother battle in a pair of showroom-standard, 423kW F-TYPE SVRs. The two World Champion karters traded fastest laps over the weekend’s respective practice and qualifying sessions in the lead-up to Sunday’s King of the Hill grand finale for road and supercars.

The big question of who’s the better driver will, however, go unanswered as a series of dramatic events unfolded for the nearly 250 000 race fans who either tuned in to watch via live stream or in person at the Knysna resort. Mark managed to set the fastest lap of the weekend with a 44.889 second run in an early qualifying session, while Gavin made it count when it mattered most in the finals.

In the end Gavin Cronje scooped top honours in Class A7 with a best time of 45.096 seconds – just three tenths ahead of older brother Mark. Juan van Rensburg, in a third, privately entered F-TYPE secured a clean podium sweep for Jaguar with a time of 47.333 seconds. 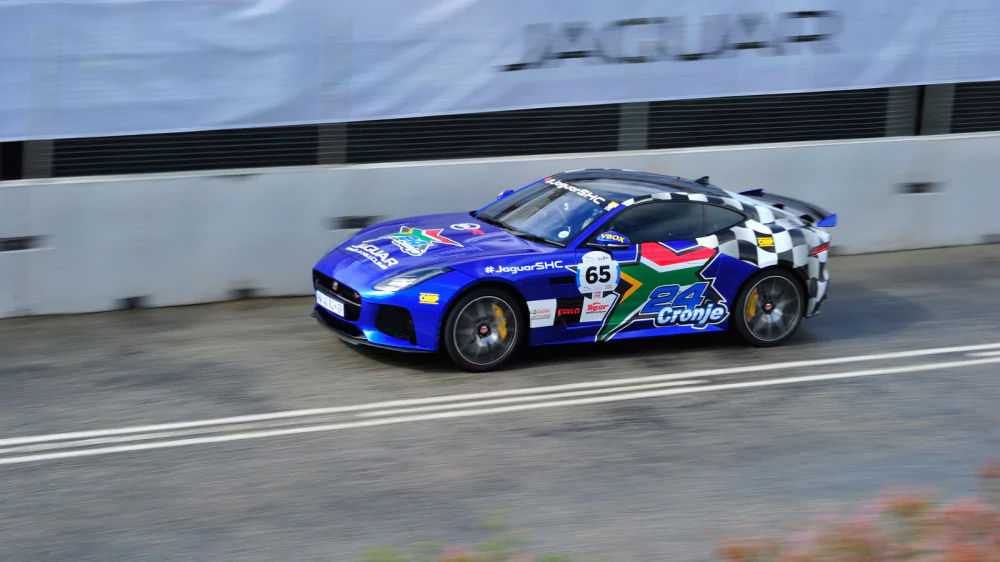 South African racing legends Deon Joubert, Shaun Watson-Smith and Mike Briggs put on a thrilling spectacle in the EV and Hybrid category with a trio of all-electric Jaguar I-PACEs. The three pulled out every trick in their competitive books over the course of the weekend – each trying to one-up each other in their near silent, 294kW SUVs.
In the end it was Briggs who took the laurels with Joubert runner-up and Watson-Smith rounding out the race-within-a-race to determine which former Touring Car ace was quickest. Mike and Deon also claimed the second and third place trophies in Class A8 for electrified vehicles.

“I’m astounded with the performance of the I-PACE,” said nine-time saloon car champion Briggs. “There’s a massive amount of instantaneous torque available here and when you put all 696Nm down off the line it launches toward turn one like a freight train. I think some competitors were shocked with just how fast an EV can be.”

Mike’s fastest lap of 49.588 smashed the EV record set last year by a purpose-built electric race car by an incredible six seconds. Notably, all three I-PACEs entered in the 2019 Jaguar Simola Hillclimb, along with another two used for guest demonstration runs, completed the entire race weekend without recharging.

The five EVs began the event with full batteries, and though each full throttle run up the 1.9km Simola hill depleted a significant amount of energy, the cars were able to recoup nearly as much charge on the way back down using regenerative braking. After the finale, the I-PACEs’ respective onboard displays showed charge levels of around 40% - meaning they each had enough range to easily complete another 150km. 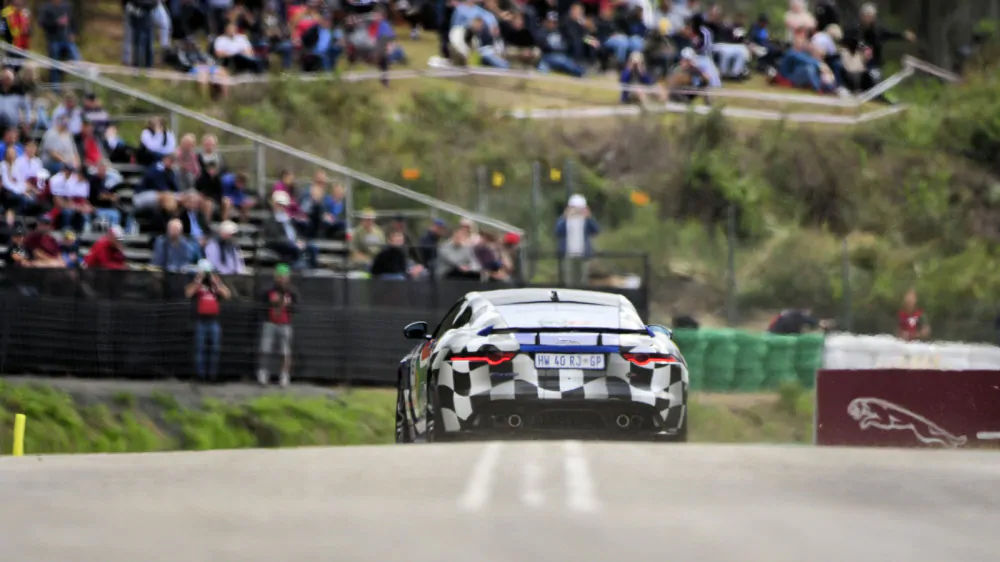 The Cronje duo went on to contest the Top 10 shootout for Road and Supercars, where Gavin put in another sterling lap of 45 seconds flat, scoring second overall by the narrowest of margins to the near-standard Nissan GT-R of Reghard Roets. Mark made a crucial mistake in the grand finale, and ended up 10th overall on Sunday afternoon.
“I pushed hard this weekend and I’m a bit disappointed to have just missed out on the overall win,” said Gavin.“Two trophies is a good result in the end and the F-TYPE performed flawlessly. The Jaguar Simola Hillclimb is a fantastic event and I’m thrilled to have been part of it.”

But it wasn’t only F-TYPE Coupes flying the Jaguar flag in the Top 10 shootout, as a pair of F-PACE SVRs proved that SUVs can also run with the big guns in the overall standings. Journalists Ashley Oldfield from Cars.co.za and Marius Roberts from Ignition TV out-gunned some serious machinery with the new 405kW F-PACEs, coming home fifth and sixth out of all 28 Road and Supercar entries respectively.

Prior to the Top 10 clash Ashley also walked away with a win in Class A9, just pipping Marius who came home in second place. Impressively, the F-PACE SVRs’ quickest times were only around two seconds off those of its more powerful, lower-slung F-TYPE SVR Coupe siblings.

“This was my fifth Jaguar Simola Hillclimb and up to now I’ve only driven sportscars here,” said Ashley. “At first it was daunting to throw a big SUV up the hill but in the end I found it a very good handler and brutally fast in a straight line. It was fun winning the SUV class and getting one over on my fellow journalist Marius.” 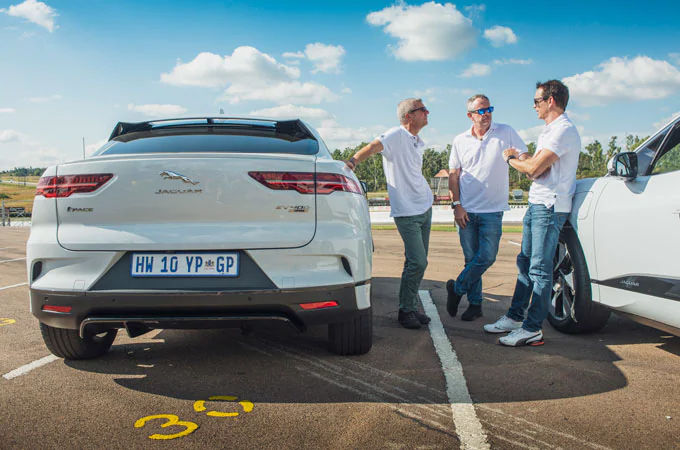 Jaguar has called on three icons of South African motorsport to compete at this year’s Jaguar Simola Hillclimb in a trio of identical, high performance SUVs. The kicker, is that the three drivers – Mike Briggs, Deon Joubert and Shaun Watson-Smith – who were well-known in the heyday of screaming, petrol-powered touring cars throughout the 1990s, will tackle the 1.9km Simola hill in near silent, all-electric Jaguar I-PACEs.
With well over 20 circuit racing championship titles between them, Briggs, Joubert and Watson-Smith can be considered South African racing tin-top racing royalty. The trio has competed at the front of various South African and international racing series including Group N, SA Touring Cars, British Touring Cars, Asian Touring Cars, Production Cars and V8 Modifieds among many others.

The three, who for more than a decade traded paint as either team-mates or fierce inter-team rivals, will once again face each other on track – this time at the Jaguar Simola Hillclimb in Knysna from 3 to 5 May. Driving identical Jaguar I-PACEs, race fans will witness a thrilling race within a race, with the winner claiming ultimate bragging rights. 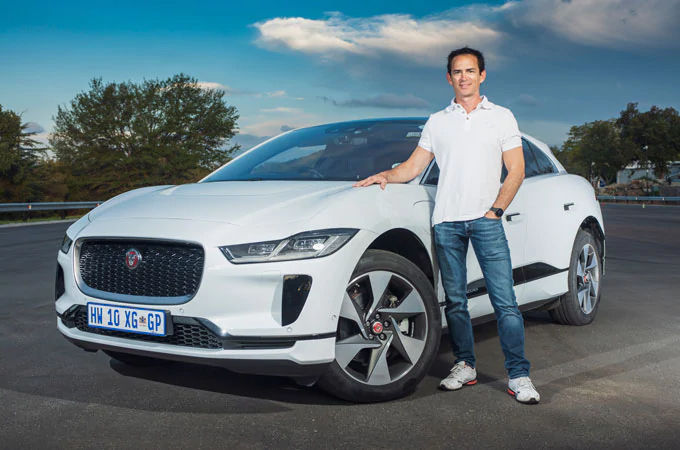 Deon Joubert, three-time SA Champion and National Colours holder, said: “Jaguar’s invitation to race has brought some fond memories flooding back. Mike is a good friend of mine but we were once bitter rivals. I’d love nothing more than to pull one over on him, and Shaun, in Knysna.”
Mike Briggs, nine-time champion, said: “Racing at the Jaguar Simola Hillclimb is such an exciting opportunity, and to do it in a powerful EV like the I-PACE will make all the more interesting. With such instantaneous torque delivery and all-wheel drive, I think this car will raise some eyebrows in May. We’re competing in a class for EVs and Hybrids, but I suspect it’ll outrun some seriously sporty petrol cars in the overall results.”

Shaun Watson-Smith, 10-time SA Champion and one of the most successful Production Car drivers ever, said: “Historically the three of us raced side-by-side, rubbing fenders and banging door handles, but this race is a different genre. In fact, the Jaguar Simola Hillclimb is the perfect setting for the I-PACE. We’ll race flat-out up the hill and then recoup some battery charge on the way back down. It’s an ideal location for this challenge.” 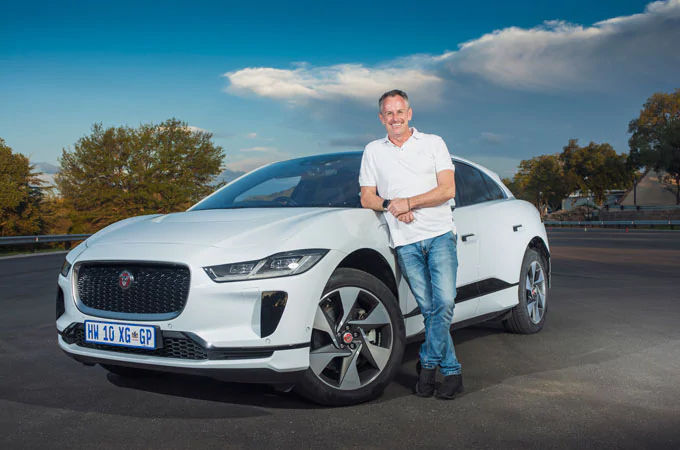 The I-PACEs to be raced by Briggs, Joubert and Watson-Smith will be in showroom standard condition. Fitted with 90kWh batteries capable of up to 470km range, the three electric vehicles will be able to complete the entire race weekend without need for recharging. All Jaguar I-PACEs comes standard with all-wheel drive, and with 294kW and 696Nm available are capable of launching from 0-100km/h in 4.8 seconds.
First held in 2009, the Jaguar Simola Hillclimb celebrates its tenth anniversary this May. As always the racing will kick off on Friday (3 May) with the annual Classic Car Friday competition, followed by King of the Hill practice and qualifying sessions on Saturday, two more qualifying runs on Sunday morning and the coveted King of the Hill finale on Sunday afternoon.